Over the past month, NXT 2.o stars Tony D'Angelo and Santos Escobar have been having lots of fun pretending to be crime family bosses, complete with attempted "hits" on each other and meetings between the two where they discussed potential ceasefires.  This is of course completely ludicrous as neither is an actual murdering gangster, but instead a wrestler in Orlando, Florida for WWE's developmental brand.  While the setting and characters pale in comparison to the blood-soaked streets of New York in a Martin Scorsese film, we'll let the boys continue to play make-believe a bit more as they will go one-on-one this week to see who is the top pretend mafia goofball on NXT 2.0.

Some tag team action to start the show off this week and it's a pretty good one.  These guys have loads of experience working together at this point, so it should always be solid.  Sikoa and Grimes take this one when Grimes nails Williams with a Cave-In, while Sikoa hits the flying splash on Hayes for the pinfall.

We next go to a backstage interview with the NXT Tag Team Champions Pretty Deadly, who mock their opponents at NXT In Your House, The Creed Brothers.

We now get a hype package for Thea Hail, a new Performance Center recruit, who hasn't even graduated high school yet.  Yikes.

This one's basically a squash for Legend and while it's not very good, it's not the normal disastrous Lash Legend match.  So that's something.

Next, we get a backstage interview with Duke Hudson, who says no one in NXT can measure up to him.  It's then when he's interrupted by a very pissed-off NXT Champion Bron Breakker.

Breakker marches past him and out to the ring, where he threatens Joe Gacy that he's coming for him.  Gacy comes out and responds by challenging him to a title match at NXT In Your House with the stipulation that if Breakker gets disqualified, he'll lose the title.

We then go to a video promo from Indi Hartwell, who challenges NXT Women's Champion Mandy Rose.

Next, we get a backstage interview with Wes Lee, who's informed his scheduled match with Xyon Quinn has been postponed again.  Nathan Frazer then comes up and offers to face Lee.

The Creed Brothers vs The Viking Raiders

A fun big hoss tag match here, just like the last meeting between these teams a couple of weeks ago.  It's very snug and hard-hitting throughout and it gets more exciting as it goes with some big moves and near-falls.  Roderick Strong tries to interfere for the Creeds, but Julius stops him, allowing Aybar to nail him with a Spinning Heel Kick before a Double Powerbomb for the pinfall.

Next, we get a parking lot interview with Bron Breakker that gets interrupted by Duke Hudson, who threatens Breakker, who then challenges Hudson to a match, which is set for next week.

A simple, but ok match.  After some back and forth action, Waller takes out Bodhi Hayward at ringside and the distraction allows him to hit the Rolling Stunner on Chase for the pinfall.

We now go to the locker room to find Toxic Attraction ranting that the Women's Division of NXT 2.0 isn't showing them enough respect and they're aiming to change that, starting with Indi Hartwell.

Then we find the Creeds arguing with Roderick Strong in the locker room over what happened in their match.  Pretty Deadly then approach Strong and mock him, leading to a match being made for next week of Pretty Deadly vs Strong and Damon Kemp.

A pretty solid match throughout here.  Both come away looking strong, even with Perez hitting the Pop Rox in the corner for the pinfall to advance.

We then go to a really silly backstage segment with Malik Blade and Edris Enofé pretending to be Santos Escobar and Tony D for some reason, until Troy Donovan and Channing Lorenzo wander over and challenge them to a match next week.

Next, we go to a backstage interview with Roxanne Perez, who is congratulated by Cora Jade and then insulted by Elektra Lopez.

A nice fast-paced match here.  They do some creative little things throughout that really elevate the overall presentation, so that's nice to see.  Unfortunately, it ends with Von Wagner storming the ring and attacking both guys for some reason.

After, we find Lee and Frazer nursing their wounds backstage, when Sanga makes comments at them, which sets off Lee, who challenges Sanga to a match next week.

As dumb as the story is that set up this match, both men are quite good in the ring and they give us a solid main event match here.  Eventually, both men's goons arrive on the outside and start brawling, and while the ref's distracted, Escobar punches Tony D with some brass knuckles, allowing him to get the pinfall.

We then get a weird promo from Joe Gacy, who rants about Bron Breakker's anger and uncontrollable rage and says when he gets the NXT title, he takes over the world.  I didn't know that title carried so much weight?  How bout that!

And that's that for a pretty solid episode of NXT 2.0.  It was mostly decent matches and minimal comedy schtick, so that's always a recipe for success. 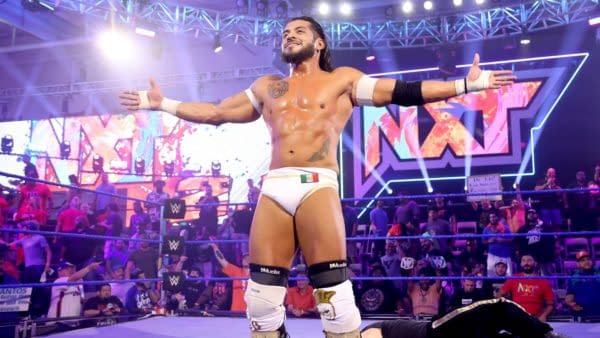 Review by Ryan Fassett
6/10
A pretty solid episode of NXT 2.0 this week, where the focus was almost solely on the wrestling and there was a minimal of comedy nonsense, which always helps.

Our recap of this week's NXT 2.0 on USA, where The Creed Brothers put the NXT Tag Team Titles on the line for the first time.